In 2015, we launched our first event, the 2015 Mario Kart World Cup. We hope to capture the same fun and competitive spirit we brought five years ago.

Welcome to the Mario Kart Wii World Cup 2020. In 2015, EndGameTV launched our first event, the 2015 Mario Kart World Cup (MKWC), and we hope to capture the same fun and competitive spirit we brought five years ago. This event is made to showcase and show off the electric and exciting gameplay that has kept this community running strong 12 years after the game’s release.

Yes! This year we focus on Mario Kart Wii, a game and competitive community dating back to 2008. What makes the game unique?

Contrary to popular belief, competitive Mario Kart emphasizes a teams format. Matches take place between two teams, each fielding a lineup of 5 (or 6) players for 12 races.  Through a combination of item strategy, course strategy, and individual racing ability, teams earn as many points as possible.

Two factors, amongst others, that make Mario Kart Wii stand out is sandbagging and its unique item system. Sandbagging, or “bagging”, refers to a staple in the metagame of competitive Mario Kart: the act of players driving backwards in an attempt to obtain the “shock” (lightning bolt) for their team. Obtaining the shock—and controlling items that provide invincibility from it—unlocks a macro-level team strategy for the game.

But why go backwards? Unlike other games, the item system for the Wii iteration of the series is unique in two aspects: a) items have set probabilities for being obtained, based on the room sized, and b) items have a max amount that can be held by players at once, many of which maxes out at one. The shock is one of those. And that shock can only be obtained in two places: the bottom two positions of a room.

It’s all this, in tandem with the moment-to-moment micro-level item strategy, high skill-ceiling driving tech, and the game’s bizarre physics (translating to hectic skirmishes and advanced shortcuts) that amount to one thing:

Mario Kart Wii is one hell of a game to watch.

21 national teams come to play in this year’s tournament. It’s a staggering amount far outnumbers any previous World Cup, and more than doubles the amount from the last World Cup in 2017.

This year’s tournament begins with a debut of the Play In Stage, featuring the lower seeded teams. This gives an opportunity to spotlight the smaller national teams while promoting closer matches. The Play-In Stage features 2 small groups, with the top 2 performing teams in each advancing to the Group Stage the following weekend. 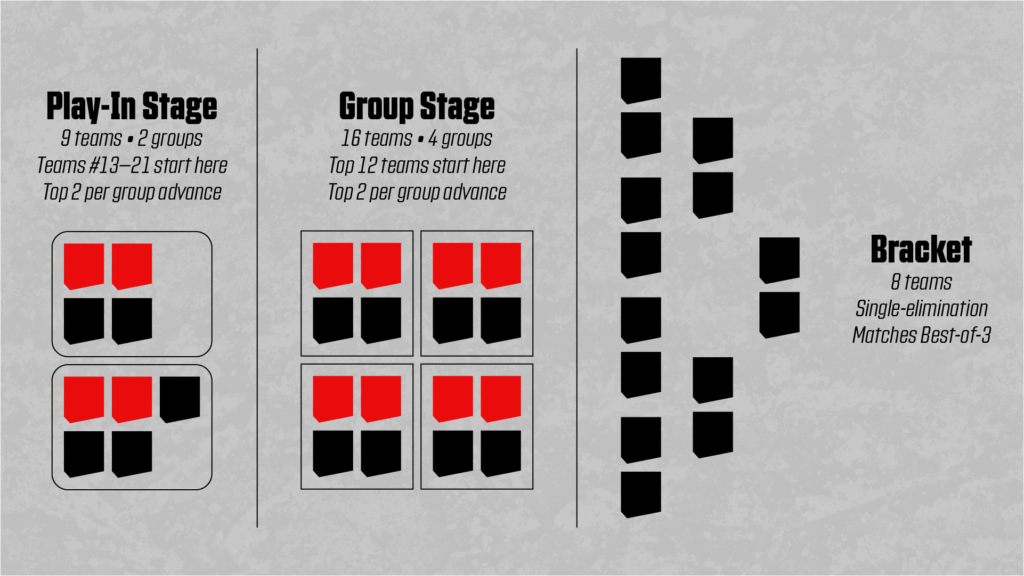 The Group Stage will feature the top teams from the Play In Stage and the highest tournament seeds, which will start in the Group Stage outright. Here, you’ll see the mainstay national teams in the Mario Kart Wii community fighting it out. Amongst four groups of four teams each group, the top two performing teams in each Group Stage pool advances to the Bracket Stage the following weekend.

The Bracket Stage is where it all comes down to. The eight best national teams exiting the group stage play Best of 3 series in a Single Elimination bracket, until a Best of 5 grand finals set where the World Cup Winner will be crowned.

You can find more information on the rules, structure, and format of the tournament on the MarioKartBoards thread for the event.

It All Starts Now

The tournament tasks place between July 10 – August 2, with matches on the Friday-Sunday of each week. You can join EndGameTV’s Mario Kart Discord server, where you can find details and the newest tournament updates.

Select matches will be broadcasted on our Twitch channel, commentated by veterans of the game. As teams have practiced, this year’s World Cup is one many look to as the one of the most exciting ones to date.

Will we see some of the powerhouses in the game⁠⁠—the United States (East and West teams), Japan, Norway, the United Kingdom⁠—take it all? What of the dark horses in Team Latin America, Canada, the Netherlands? And beyond these teams, a staggering number of formidable national teams come even from the Play-in groups, with Finland, Belgium, Ireland, and Team Asia having quality players with something to prove.

Erik "Eirik" Jacome (he/they) is the founder of EndGameTV. He specializes in broadcast production, graphics, and probably eating more chicken nuggets than you. Follow him on Twitter @eirikpls.
All Posts
PrevPreviousWelcome to EndGameTV
NextBeware the Contenders – A Look at the 2020 MKWC Play-In StageNext